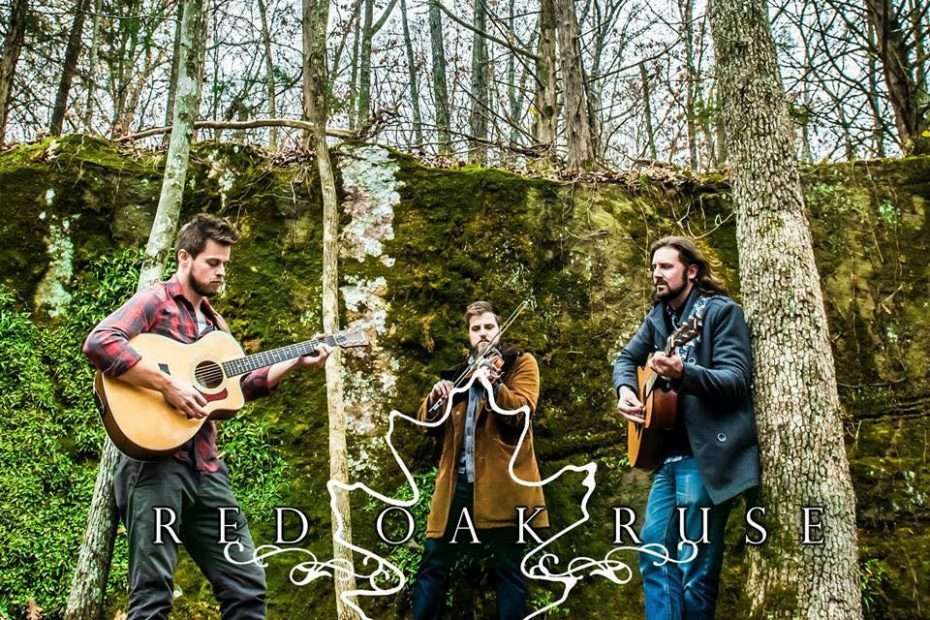 Red Oak Ruse’s self-titled debut album officially releases Sept. 2, 2017, at its release party at Chelsea’s Corner Cafe & Bar in Eureka Springs, the group’s home base. But it’s already streaming on their website as well as on Spotify, and it is for sale now on CDBaby – and we think it’s a contender to be your new favorite album. I can’t stop listening to it – and it’s rare for me to listen to a full abum without skipping half the tracks, much listen to it in full on repeat.

Song after song, Red Oak Ruse provides surprising twists and turns in musical stylings, genre-hopping, and instrumentation. The songwriting is some of the best we’ve heard come out of Arkansas in a long time: fantastic hooks in nearly every track’s melody; outstanding lead vocals and harmonies; subtle but powerful bass lines; playful-yet-powerful fiddling; high-speed, intricate, and expertly delivered electric and acoustic guitar solos; and, best of all, lyrics that are honest, entertaining, inspiring, and easily accessible (in other words, you don’t have to be a poetry major for them to mean something to you).

Track 1, “Luke,” is an instrumental that opens with a smooth, soothing and noodly guitar solo that reminds us a little of the Allman Brothers’ “Melissa.” Beautiful, relaxing, but not sleepy and certainly not boring.

Once we heard Track 2, “Dust in the Rearview Mirror,” we were hooked. Fiddler and co-lead vocalist Michael Schembre’s voice shines, with a childlike, gentle quality that’s rarely paired with the power he also portrays, not just in projection but in message. Justin Thomas Easter’s backup vocals are on point, adding much depth and sophistication, along with his catchy lead guitar hooks.

Well once in a while you still cross my mind

And I get to thinkin’ on the past

Well it makes me sick, then I think about it

And realize I wouldn’t change a damn thing

‘Cause every mistake that I’ve made in life

And every single wrong deed

It turned out to be just what I need

So I’ve made up my mind

No more livin’ in fear

‘Cause after all it’s just dust in the rearview mirror…

After all it’s just dust in the rearview mirror

‘Cause when you learn to just let it go

And release your pride and your hate

You can live your life despite trouble and strife

In a way other people can relate

So I’ve made up my mind

No more livin’ in fear

‘Cause after all it’s just dust in the rearview mirror…

After all it’s just dust in the rearview mirror.

In the fast-tempo Track 3, “Strain,” Chris Loeffler’s drum skills and Easter’s guitar licks take front and center in a tune about the human struggle to be heard. Fun, upbeat, toe-tapping song with lighthearted lyrics about the serious difficulties of feeling lost and ignored in a busy world. Easter’s electric guitar solo is outstanding, as is Schembre’s fiddling. Both are teeming with energy and enthusiasm, but are never choppy; in fact, the guitar solo is silky-smooth despite some intensely fast finger work, and Schembre’s fiddling will leave your jaw on the floor, on this and many other tracks.

The lead guitar and fiddle shine again on Track 4, “Livin’ the Dream,” which kicks in quickly with some up-tempo bluegrass instrumentation mixed with a little flavor of punk or metal – yes, you read that right – in Easter’s lead vocals. It’s an entertaining, get-up-and-go track with a refreshingly different take on how to sing a song that’s styled in a largely bluegrass fashion.

Track 5, “Sunset’s End,” is a beautiful, soothing, inspiring number with some flavor of early Eagles’ hits, written around the members’ love for the Ozarks and, specifically, for Eureka Springs. Easter’s lead vocals are heartfelt, bare and bright, and Jonathan Hagood’s bass lines lend a fabulous foundation for this wistful, emotion-packed tune. Schembre’s fiddle makes you long for the mountains of home – and if it your home doesn’t have mountains, it may make you consider relocating to the Ozarks.

“How Good You Look,” Track 6 on the album, is a cheerful, upbeat love song again along the lines of some early Eagles’ hits, but with a sassy fiddle thrown in. Easter expertly mans the lead vocals for the lyrics he penned that will make you smile while you instantly try to memorize them:

She’s young and fine and educated

And all it takes is just one look at her

To blow my mind away

How good she looks tonight

Is taking me by surprise…

Track 7, “Fight or Flight,” is where you’ll hear some pop flavor along the lines of perhaps Third Eye Blind. A pop song at its core, the song tells the story of reluctantly falling in love while “young and naïve,” and features edgy but pure tones in Easter’s lead vocals. Note the central fiddle solo with psychedelic effects and all four members’ skills at softening their sounds before a crescendo toward the end.

Up next is “Love at First Lie,” a merry, lively tune with great vocal harmonies, strong acoustic guitar licks and story-song lyrics that Schembre wrote about falling for someone while on the road, with a nod to the power of the initial “best-foot-forward” acting job we all inadvertently play when we meet a new romantic interest. Inserted in the middle is another boisterous and impressive fiddle solo, in between Schembre’s skillfully performed lead vocals.

Track 9, “If I Don’t Know,” opens with a playful fiddle lead, and then takes off with a fast tempo coupled with a super-catchy refrain: more pop sound with a timeless quality that’s hard to compare to anything, really. The song has some of the best harmonies on the album, and undoubtedly the most accessible lyrics and melody. Schembre shows off his vocal prowess with some waterfall-style note progressions that few can nail. The only drawback: I wish this song were longer!

If I don’t know where I’m going baby yeah

“I Don’t Usually Do This” is another fast-tempo story-song written by Schembre, this one about the lines he’s heard from women he’s met while touring with bands. Ha ha. We’ll let you listen to fill in the blanks, but it’s pretty good stuff and will leave you grinning ear to ear.

Track 11, “The Artist,” is a soulful, heartfelt number with Schembre on lead vocals. “When you see something so beautiful, don’t you wanna know just who the artist was? Where in heaven did they come from?” The blues-tinged guitar licks lend a soothing, sophisticated sound to lyrics and a melody that are difficult to not let stick in your head.

“Someone to Blame,” Track 12, opens with serious, slow harmonies but quickly takes off with an uptempo rhythm featuring a fiddle that is alternately playful, soulful, regretful, and haunting. The lyrics are no different, covering the wide range of emotions that often accompany the challenge of getting over a broken relationship.

The album closes with another beautiful instrumental called “John;” this one reminds us of The Avett Brothers a lot, but perhaps with an even fuller sound, packed with emotion and many variations in rhythm and volume. It feels a lot like a Sunday morning sunrise at the end of a long-but-great music festival weekend: peaceful, hopeful, promising, and soothing.