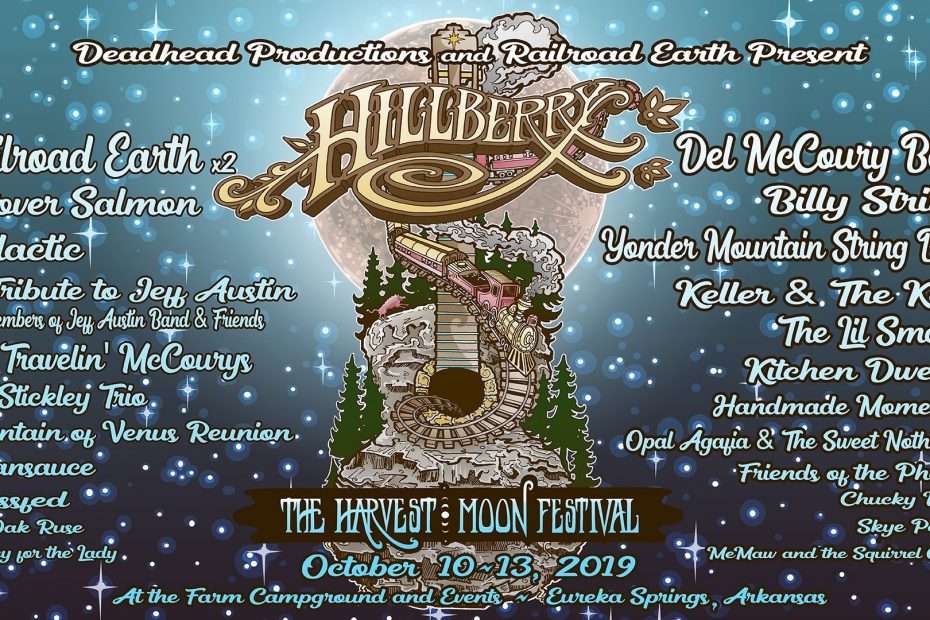 Hillberry The Harvest Moon Festival 2018, co-hosted by Railroad Earth, has released its first lineup announcement for the October 11-14, 2019, event.

Hillberry Festival is hosted by Deadhead Productions, which has hosted various music festivals at numerous venues over the years and now is headquartered at The Farm near Eureka Springs.

Tickets are on sale now at Eventbrite at early bird prices while they last. Ticket sales will be limited to 3,000 attendees, and the festival is expected to sell out.

The Farm is located in the beautiful Ozark Mountains just a few miles from historic Eureka Springs, amid rolling mountaintops on a largely wooded, privately owned, 160-acre property; it is 26 miles from Rogers/Bentonville and 50 miles from Fayetteville. The venue boasts beautiful 360-degree panoramic views from its perch atop 160 acres that back up to Mark Twain National Forest. Beaver Lake, Table Rock Lake, and the White River are all within 5 miles of The Farm, offering popular spots for floating, hiking, swimming, and picnicking.

But without ever leaving the property, Hillberry attendees can enjoy mountain biking and hiking, plus permanent and temporary art installations, artists, workshops, yoga, arts and crafts, and all sorts of children’s activities scheduled every day from morning till night. Shuttles are often available for transportation to nearby lakes as well as to downtown Eureka Springs.

The Farm also has an on-site general store selling snacks and light groceries, beverages, ice, and various sundries; the property also boasts a brand-new, 3-mile mountain bike trail for cycling and hiking and an 18-hole disc golf course available for use at no extra charge. Additionally, canoeing/kayaking opportunities abound with the White River and Kings River each just a few miles away with multiple river outfitters in the area. Table Rock Lake is less than 5 miles away, and boat rentals are available at the nearby Holiday Island Marina.

Deadhead Productions formed out of a collaboration of musicians and event planners originally called Friends of the Phamily Productions. Deadhead Productions has organized and hosted more than a dozen music and camping festivals, including several jamband-heavy Byrdfests 7 & 8 held at Byrd’s Adventure Center near Ozark, Arkansas; eight multi-genre Highberry Music Festivals held first in Rogers, then at Byrd’s twice, then, as it grew, at Mulberry Mountain (home of the now-defunct Wakarusa), and now at The Farm, as of this year; two Phunkberry Music Festivals held at The Farm, featuring, you guessed it, national and regional funk bands; and the ever-growing, bluegrass-focused Hillberry Festival, which is headlined and co-hosted by international award-winning progressive bluegrass/folk-rock band Railroad Earth.