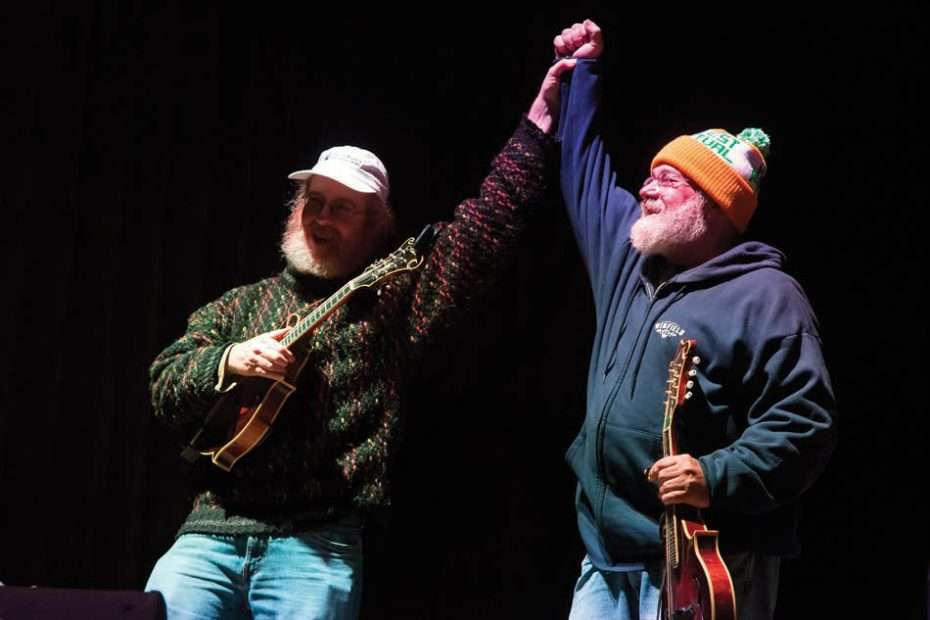 Many of his Eureka Springs neighbors may not know it, but Ron Landis, 59, is known all over the world for his coin engraving and minting skills. He maintains a studio on White Street where he mints coins using methods and machinery typical of 200 years ago, and he hand-engraves “hobo nickels,” which he sells to collectors all over the world.

But this past weekend, he gained quite a bit of new notoriety for his musical ability — something most Eurekans are already very familiar with. His former band, the Doe Brothers, was the “house band” at Chelsea’s Corner Cafe & Bar for years, beginning in the 1980s, and now he regularly sits in with several different groups all over town and plays with his “regular” group, Magic Mule. He has long been known around the region for his guitar and mandolin playing, but here lately, he’s built a reputation as a skilled performer on dobro and on steel guitar, also called “lap steel.”

Over the weekend, Landis won not one but two picking contests at Yonder Mountain String Band’s Harvest Music Festival, which took place last Thursday through Saturday at Mulberry Mountain just north of Cass on Highway 23.

On Friday, he entered the mandolin-picking competition and went up against three other entrants; Landis won, and his reward was $50, a basket of prizes and the opportunity to perform a song with Mountain Sprout. The prizes including things like T-shirts, a wool cap, artwork, a copper bracelet, a hand-carved Jerry Garcia hand-print, and “lots of other neat stuff,” Landis said.

“My main competition then was a young hippie-looking kid, he looked a lot like a young Sam Bush and he was really good,” he explained. “It was a really close decision between the two of us, so I ended up sharing my prizes with him.”

The performance part of the prize ended up being a lot more fun than he’d expected, he said.

“When I got up to the stage, it was dark, and Grayson (lead singer of Mountain Sprout) asked me my name,” Landis said. “I guess he couldn’t see me with the lights shining in his face. I said ‘Ron Landis,’ and he looked closer at me and said, ‘Oh, it’s you! Get on up here!’ So because I knew them and they knew me, they let me play the whole show with them.”

Despite the rain and frigid temperatures that evening, there were hundreds of fans present (if not more) and “they knew all the words to the songs, it was a lively crowd,” Landis described.

Saturday morning brought the guitar flat-picking contest, which requires that you use a flat pick — and not fingers — to make the notes.

“The Sam Bush-looking kid was also my main competition at guitar, and he was really good but he did the finger-picking style,” Landis explained. “There was another guy who was pretty good too, but what hurt the other entrants was that their styles just weren’t appropriate for a flat-picking com-petition.”

Landis won that contest, too.

And because he won both competitions, he was awarded the opportunity to choose which instrument to play and which band he wanted to perform with on the Main Stage that evening. He chose Railroad Earth, an internationally renowned progressive jam-bluegrass band based on the East Coast that headlines major festivals all over the country and has for over a decade. And he decided to play the mandolin with them.

“I really wasn’t that familiar with Railroad Earth before that, but they really rocked,” Landis said. “They were great sports about it. I told them, ‘Thanks for letting a new guy come in like this, it’s got to be a scary thing sometimes,’ but they were very cool about it and had fun with it.”

When Landis was introduced by Railroad Earth and he walked out on stage, the audience — several thousand people — emitted the loudest cheers they had all evening, by all accounts.

“I had a lot of support out in the audience, and it felt so great,” he says. “I savored every moment of it; it was a huge rush for sure.”

Landis says the moment was definitely a lifetime high point, right up there with the time that Sam Bush sat in with his former band, the Doe Brothers.

“Sam Bush is one of my heroes, so that was really special,” Landis recalled. “But Saturday night, they had the light show and thousands of people in the audience and the fog machine and everything.

“The Railroad Earth guys were so cool; they hammed it up a little and really let me milk it while I was up there on stage. It was so much fun!”

The band members and Landis performed the song “Old Dangerfield,” a classic but difficult bluegrass tune by Bill Monroe — another one of Landis’ musical heroes and major influences.

It was the same song Landis had per-formed in his competition, so he was very familiar with it after learning it and practicing it over the past several weeks.

“They suggested that song, and it’s the only tune I’ve been playing for the last two weeks, so I was prepared,” he said. “I played it for the band backstage before the show to show them I knew it and how I played it. The Railroad Earth guys suggested that we slow it down and add a little groove to it, and it ended up sounding fantastic I thought.”

The audience – and this reporter – agreed wholeheartedly, as the seasoned music fans on hand literally stopped the show with ex-tended cheers for Landis after the song end-ed. The Railroad Earth members grinned wholeheartedly as they waited for the applause to die down, and the band’s regular mandolin player, John Skehan, held up Landis’ arm like a boxer who’d just won a big fight.

He sure felt like he had, he said. Landis also plays the banjo, fiddle, harmonica, tenor banjo, bouzouki, and dobro.

“He inspires me musically, and has ever since we first started playing together after high school in Denver,” Onofrio told the Citizen on Tuesday. “He’s also a great craftsman. The first time I saw him he was playing a banjo he had built. He inspired me to go to instrument repair school to learn how to repair and build violins. “The area we grew up in in Denver turned out some really great musicians like Tim O’Brien and many others – and Ron is one of them,” Onofrio continued. “Right from the beginning we were playing with fantastic musicians, and Ron held his own even in the early years when we were beginners.”

Not long after high school, Landis had formed a band in which he played banjo, his primary instrument of choice at that time. He also had already learned to play guitar. But with several other banjo players avail-able and a scarcity of mandolinists, Landis decided to try his hand at the instrument. It’s known for its difficulty to play, with the strings very close together and chords requiring holding down eight strings at once, Onofrio explained. It requires strong hands, fast but short hand and arm movements, and a great ear, he added.

“He really excelled, almost instantly, at mandolin,” the fiddler recalled. “He learned it really fast — within a couple of months of first picking it up, he was playing at blue-grass speeds and had really learned how to get around on the instrument. It takes some people years to get to where he got in a couple of months.”

Onofrio says that Landis is one of few musicians that any band can hire, and “Ron can just show up and do a great job without rehearsing with them or anything – and not many people can do that.”

Landis explains that music has helped him overcome many challenges in his life, including losing his business partner, best friend and Doe Brothers counter-part in 2005, when Joe Rust committed suicide.

“He suffered from depression, so it was no surprise to his family when he committed suicide,” Landis said quietly. “We had such a symbiotic relationship, it was like someone tore my arm and leg off.”

Landis says he drank heavily for a few years and fought his own depressive battles, before a serious car accident helped him “wake up.”

“I just got back into my music then,” he recalled. “It’s my cozy place; it’s my therapy.”

And for thousands of fans last Saturday night, it was clearly everyone’s therapy.