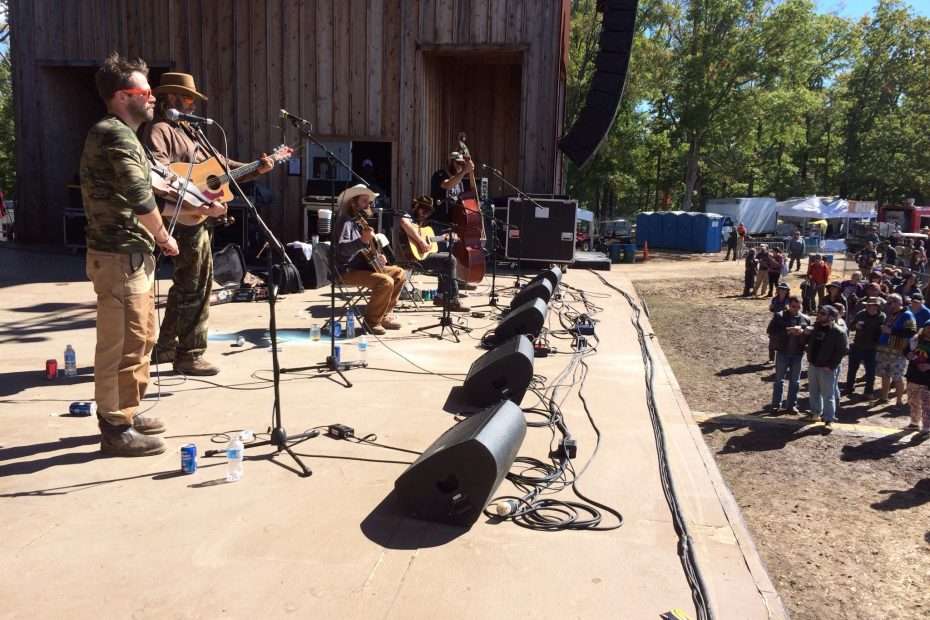 Some might say that Blayne Thiebaud IS Mountain Sprout. No doubt, his energetic and oftentimes wild presence fills up the stage when the Eureka Springs-based hillbilly-bluegrass band performs. Thiebaud, the band’s fiddler, is never still when he’s playing, bend-ing forward and back, side to side – all while sawing his fiddle with bullet-like speed, lightning-like electricity and stop-watch-like precision.

Music critics writing about their shows have sworn they’ve seen smoke coming off his bow, and it would surprise none of Mountain Sprout’s fans if that actually occurred. Fans adore his on-stage persona, and Eureka residents have come to adore him off-stage as well. Friends and bandmates alike describe him as a “joker with a spiritual and serious side.”

But now Thiebaud, 30, is leaving Mountain Sprout, moving to Hawaii early next week. His last performances with the band will be Friday night, Oct. 25 at Chelsea’s Corner Cafe & Bar, and Saturday, Oct. 26 at a live taping of the international radio program “WoodSongs,” happening at The Aud as part of the Ozark Folk Festival this weekend.

Mountain Sprout has built a reputation over the last seven years as a hard-partying, rambunctious, irreverent group whose hits include tunes like “Screw The Government,” “Marijuana,” “Town Drunk,” “Dry Counties,” and “Tweeker,” which pokes some tongue-in-cheek fun at meth users.

They’ve toured the country a number of times and are favorites in the Mid-South region, particularly at music festivals large and small. The band typically performs several times at major annual Arkansas music festivals such as Wakarusa and Yonder Mountain String Band’s Harvest Music Festival, which incidentally was last week-end.

Festivals are a favorite place to perform for Mountain Sprout, and its members can usually be found pickin’ and singing around a campfire with friends and fans till sunrise at such events. It is at festivals that Thiebaud is best known for his rowdy behavior, said lead singer Grayson Van Sickle.

“He’s kind of known for passing out by the bonfire and burning his boots, so he’s constantly having to buy new ones after almost every festival,” he said with a laugh. “But seriously, he’s the world’s best fiddler in my opinion. He’s irreplaceable, actually. It will definitely be hard to reproduce the kind of energy Blayne brings to the stage.”

Thiebaud’s energy and carefree spirit have made him a lovable character, both on stage and off, but they’ve also led to sever-al abrupt life changes, some hard times and some difficult lessons.

One of those was his unexpected exit from the U.S. Army in 2002. He’d been enlisted for 11 months and was stationed in Hawaii when the Sept. 11 attacks occurred.

“It was intense during that time,” he recalls. “At first, my initial reaction was that it was some fake military exercise. Then we found out it was real, and we were pretty sure we were all going to war.”

Luckily for Thiebaud, the Army units stationed in Hawaii were at the bottom of the list to be sent overseas, so he didn’t have to go. It wasn’t too much later that his independent thinking and penchant for rebellion got him excused from further military service. He was honorably discharged, since he “didn’t quite see eye-to-eye with the Army,” he says, grinning.

He stayed in Hawaii for another six months before moving back to his home state of Texas; he grew up in Odessa.

“I got derailed a little bit in Texas by the party lifestyle, so I left Texas and went to Illinois to stay with my older brother, Dean, who I’d never really known till then,” Thiebaud explained. “I slept on Dean’s couch for three months. He was in a band called The Woodbox Gang, and that’s when I started really playing music.”

He’d taken violin lessons as early as sixth grade, but had focused on guitar in the years leading up to his move to Illinois. Fans may be surprised to learn that his favorite music to play on guitar was heavy metal: Pantera, White Zombie and Marilyn Manson were among his faves. Fans also may be surprised to know that Thiebaud doesn’t consider himself a “real” fiddle player. “I just try to mimic whatever I hear and like,” he says. “I don’t even know the lick to Turkey and the Straw, for example, I just play it like I remember it in my head.”

Whatever his methods, it was during his time at his brother’s – who earlier this year moved to Eureka and joined Mountain Sprout as well – that Thiebaud picked up the violin again and began to learn to play it bluegrass-style.

“I’d sit on the church steps at an old church where Dean’s band practiced and listen to them play,” he recalls. “One day, a guy named Adam Wagner walked up to listen, too. That’s how I met Adam.”

The two became fast friends and music-playing buddies, eventually forming a band called the Broke Strang Band. They performed around the Midwest region, coming through Eureka Springs the first time in 2004.

“I just kept coming back here after that; it was like I never really left.”

At that time, Mountain Sprout was based in New Orleans as a street band with a rotating membership of about a dozen musicians. Thiebaud met Van Sickle busking on a New Orleans street, and he ended up sleeping on his floor for several months, joining the group of Mountain Sprout musicians not long after. They traveled back and forth between NOLA and Illinois, performing at bars and festivals in between and staying in Eureka Springs as often as possible.

In 2006, Van Sickle, Thiebaud and Wagner sat down and decided to get serious about Mountain Sprout. They were at PK’s in Carbondale, Ill., when they made a pact that they were going to move to Eureka Springs, where their bassist, Melissa Carper, already lived.

“Grayson was looking for a place to settle down and raise his family, and Eureka was a good centrally located hub for the Midwest to branch out from. We already had some connections in the business here, and a fan base, so we moved to Eureka in the fall of 2006,” Thiebaud explained. “I lived in a storage unit with Adam until we got kicked out, in the dead of winter – it was cold as sh**! Later we met Caitlin Cantele and Whitney Capps and ended up renting a house on Owen Street with some of our new friends.”

It didn’t take long for the gang to become known as the hard-partying band. Some have criticized Mountain Sprout for this and have advised them to “calm down” and focus more on their musician-ship.

“Duh,” Thiebaud says of those who say the band parties too hard. “It’s always been like that. We’ve been partying hard since before we started playing music. I started playing the fiddle for free beer – who wouldn’t? Then I learned I could actually make money at it, too.”

Mountain Sprout took off, growing in popularity and in reputation. In 2009, Carver quit the band and bassist Daniel Redmond of Broken Arrow, Okla., moved to Eureka to become a full-time member.

The party lifestyle and spending nine or more months a year touring and performing began to wear on Thiebaud within a few years of Mountain Sprout moving to Eureka Springs, he says.

It was time to move on.

“The lifestyle just got to me, all the drugs and alcohol that come with being a professional musician and playing in bars,” Thiebaud says. “Grayson joined Alcoholics Anonymous and stopped drinking, Adam finished his first solo CD and starting hitting that hard, and Dan also had a side project, Ice Cold Fatty, starting up. I went on a three-month bender and after that I knew I had to go.”

It took a few months longer than he’d planned to make his exit, he says, but it’s all worked out. The band recently hired a new fiddler, Mike Schembre from Columbia, Missouri.

Now, Thiebaud is going to pursue “other creative avenues,” though he will also likely end up playing fiddle whenever he can – “just not right off the bat,” he says. “I’m thinking about going to massage school just to have another profession under my belt that has nothing to do with playing music in bars.”

He will be living in the town of Captain Cook on the Big Island of Hawaii, just south of Kona. He has a job lined up working for his room and board by clean-ing, cooking and entertaining for guests at a bed and breakfast, and he has several entertainment-job interviews lined up, he says.

“I’m relieved to finally be moving,” Thiebaud says. “I feel like I don’t have to carry the weight of the world on my shoulders anymore, that weight of the lifestyle and being a so-called rock star.”

He says he will miss the people of Eureka the most – “and Chelsea’s. It’s just home; it’s the living room of Eureka, at least for me. I still get mail at Chelsea’s.

His bandmates are not at all happy that he’s leaving, but they’re determined to carry on with Mountain Sprout’s mu-sic. Redmond says that while Thiebaud does bring the most energy to the stage, “Mountain Sprout is Grayson, who writes almost all of our songs. As long as Grayson is  comprehensive, Mountain Sprout will happen.

“I think every one of us is a big part of Mountain Sprout, but we are all ultimately following Grayson’s lead,” Redmond continued. “But I hate to see Blayne go. He’s the most artistic of all of us.”

Redmond replied by giving Thiebaud some tongue-in-cheek advice: “You know what I suggest you do before you go to Hawaii? See as many possums as possible. That’s the first thing I’d miss in Hawaii. ‘Man, I really wanna see some possums.’”

Then Redmond gets serious, when asked to describe his bandmate in three words: “Brother I love,” he quickly replies.

“I think it sucks that he’s leaving, but he’s got to do what he’s got to do,” the guitarist and protective big brother said. He and Wagner provide acoustic rhythms for the band, taking turns on lead and both contributing vocals as well. “The band will be fine, and I hope Blayne will go get his head together and come back in a few months.”

Time will tell. Meanwhile, Mountain Sprout will tour in support of the new al-bum it recorded two weeks ago, entitled “Long Time Coming,” after a new song written by none other than Blayne.

Theibaud’s fans and friends — and especially this writer — certainly hope they do come true for him.

*Originally published in the October 24, 2013, edition of the Lovely County Citizen