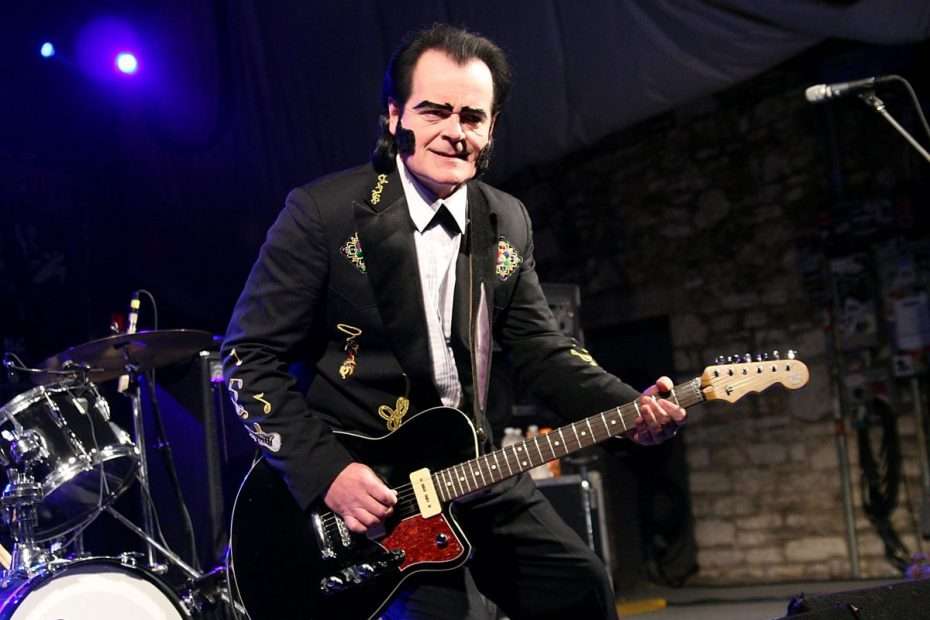 Unknown Hinson is a three-piece comedic rockabilly outfit led by Stuart Daniel Baker, who’s built a global fan base as a comedic country musician, songwriter, and voice actor; he is perhaps best known for his role as the voice of Early Cuyler on the Adult Swim cartoon series “Squidbillies,” but his music is hugely popular as well, with a cult following that includes many high-profile personalities.

Unknown Hinson, dressed in his signature rodeo tailored coat and black ribbon necktie, is a dark parody of the Country Western stars from the 1950s through the mid-’80s. His recorded material has the sonic qualities of a regional country star with access to cheap recording studios and hack producers.

With his glued-on sideburns, blacked-out front teeth, and dark hair slicked back to reveal a prominent widow’s peak, he has been referred to as the “hillbilly vampire.” The self-proclaimed “King of Country Western Troubadours” speaks and sings with an exaggerated Southern drawl, keeping audiences in stitches by pronouncing words like woman as “womern,” window as “winder” … you get the idea.

Hinson’s personality is that of a hell-raising and hard-drinking country singer with a preference for “party liquor,” sexy womerns, and fine guitars. Baker has carefully cultivated his alter-ego. Much like Andy Kaufman’s alter-ego, Tony Clifton, Unknown Hinson never breaks character in public and adamantly denies having any connection to Danny Baker.

As a live performer, Unknown Hinson has shared the stage with many notable rockabilly, country, and psychobilly acts such as The Reverend Horton Heat, Marty Stuart, and Hank Williams III.

He has a strong cult following and many famous fans, including Ed King of Lynyrd Skynyrd, Waylon Reavis of Mushroomhead, Billy Bob Thornton, and Matt Groening. Hank III, grandson of Hank Williams, has Unknown’s face tattooed on his biceps.

In 2008, working under his real name of Stuart Baker, Hinson was hired to play bass as well as lead guitar in Billy Bob Thornton’s band The Boxmasters. For this hired-gun gig, Baker appears without the familiar Unknown Hinson wardrobe and makeup, instead appearing in a ’60s vintage suit, white shirt and black pencil tie.

In 2009, Hinson’s “Torture Town” won in The 8th Annual Independent Music Awards and Vox Pop vote for Best Alternative Country Song. The group played Smoke & Barrel in Fayetteville in fall 2017 and has headlined many sold-out shows in Little Rock over the past 12 years.

The Reverend Horton Heat is perhaps the most popular psychobilly artist of all time. The Reverend (as both the 3-man band and its guitar-playing frontman are known) built a strong cult following during the ’90s through constant touring, manic showmanship, and a twisted sense of humor.

The latter was nothing new in the world of psychobilly, of course, but The Reverend’s true innovation was updating the psychobilly sound for the alternative rock era.

In his hands, psychobilly is something more than retro-obsessed kitsch – it brings roaring distorted guitars, it rocks as hard as any punk band, and it doesn’t look exclusively to pop culture of the past for its style or subject matter.

Most of the Reverend’s lyrics are gonzo celebrations of sex, drugs, booze, and cars – and true to his name, his concerts often feature mock sermons in the style of a rural evangelical preacher. The band’s initial recordings were released by Sub Pop, at the height of the grunge craze; after a spell on the major label Interscope, The Reverend Horton Heat returned to the independent world, still a highly profitable draw on the concert circuit.

Listening to The Reverend Horton Heat is tantamount to injecting pure musical nitrous into the hot-rod engine of your heart. The Reverend’s commandments are simple: Rock hard, drive fast, and live true. And no band on this (or any other) planet rocks harder, drives faster, or lives truer than these guys.

The group formed in 1985, playing its first gigs in Dallas’s Deep Ellum neighborhood. The band signed to Victory Records in late 2012 and released its 11th studio album, Rev, in 2014. The Heat also released a 2-track vinyl in 2016 in honor of Record Store Day, featuring the title track “Hardscrabble Woman” and “Lying To Myself.”