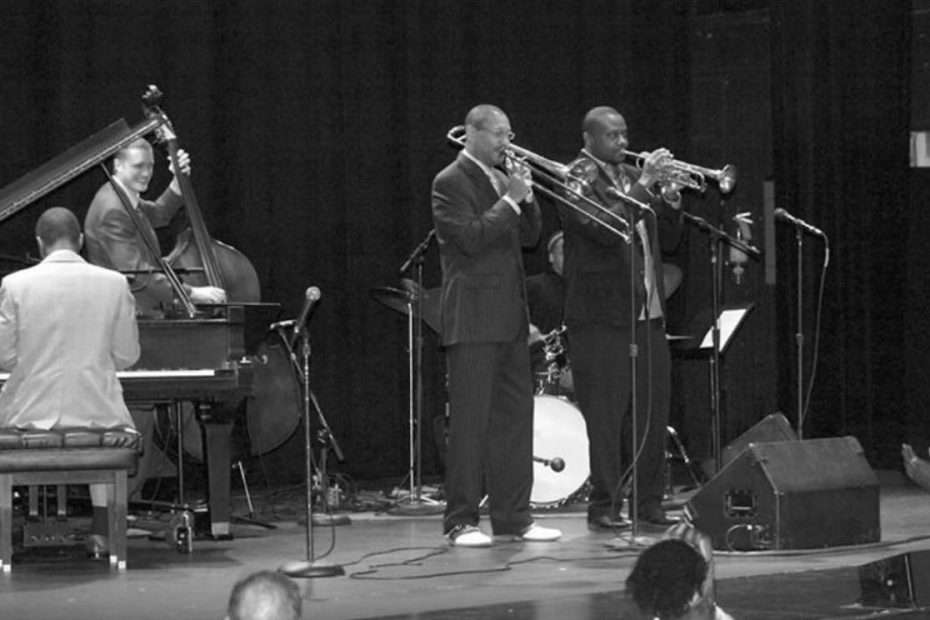 The Delfeayo Marsalis Quintet put on an amazing show on Saturday night at The Auditorium in Eureka Springs, a performance with a perfect rhythm and flow that lasted just over two hours plus intermission.

Admittedly one who gets bored easily at instrumental concerts, I only one time began to wiggle in my seat, and that was at the very end of the very last song before the encore — and it was a very long ballad to boot (and if you’ve read my reviews before, you know that ballads are my least favorite type of song in any genre).

So I think this should tell you that Delfeayo Marsalis and crew were captivating, so say the least, throughout the entire evening, even for this Attention-Deficit listener.

The evening began with a song called “Go To The Mardi Gras,” which was a fabulous and somewhat subtle way — they didn’t tell us the title till the end of the song on this one, and it definitely built up after a more mellow start — to get the evening swinging. By the time the pianist rocked his long solo, I had the feeling this group was about to seriously break loose, and break loose they did.

Marsalis impressed mightily with his first solo of the evening during this tune; the audience cheered his amazing finger-work on single-note runs even, not to mention the fancier stuff.

But it was Sean Jones on the trumpet and the drum solo that really brought the house down first this evening. Drummer Winard Harper broke things down unbelievably with some funky jazz beats and an extended roll that lasted well over a minute, to an almost wildly appreciative audience — it was unreal.

Then the horns came back in to close out the song. Here’s a clip of the end of this song:

The second track of the evening was called “Br’er Rabbit,” and appropriately it did feature a cartoonish quickstep to it, and a fun, fast tempo.

The trumpet melody on lead featured an amazing range and some impressive finger and mouthpiece work. Then the trombone entered, quietly, subtly and smoothly — its part was a little more abstract at times, while building in a more traditional manner.

About right here — in the middle of this song — all the front of house lights went off for about five seconds, and the band didn’t miss a beat at all! Jones, the trumpeter who was standing off to stage left waiting his turn to play again, was seen having a good laugh when the lights came back on. Now that is what I call professionalism on stage!

Before I could think another second about the lights going off, the trombone grabbed my attention again, with a low, easy-yet-soulful solo of roughed-up notes in a long string.

Soon, pianist Richard Johnson soloed with no other sound in the room — you could have heard the proverbial pin drop. He played a little more modern-style jazz rhythms in parts, but the notes sounded somehow traditional as well. This beginning jazz listener loved it, as did the audience. Here’s a little peek, recorded from the cheap seats:

Next, Marsalis introduced the “dark side” of the rabbit: “Br’er Rabbit has a dark side, you know,” he said, laughing. “He is a whiskey drinker, and is known to be a bunnyizer … and this next song is dedicated to that side of him.”

It was called “Br’ Rabbit,” pronounced “bruh” as in, slang for “bro” or “brother.” The audience laughed.

The song was sexy and smooth and reminded me of a seduction scene from an early 007 film, and was very grown-up, sophisticated and loungy in style — but sweet, not campy. It would swing from breaktakingly sexy to overwhelmingly beautiful and back again — reminding me of a man wooing a woman with sweet talk before moving in for “the kill,” ha ha.

The trumpeter threw in a little Pink Panther flair here and there, adding some fun elements, but it was the pianist who captured my attention fully during this tune.

I also noticed (barely) during this song how respectful the players are of each other during their individual solos. For example, during the piano solo, the horns would literally disappear behind the curtains, coming back out only seconds before it was their turn to play again.

This continued throughout the evening and impressed me greatly. It’s nice to see grown, talented and highly respected musicians play so well together, so to speak.

The next track was a nice, fun, lighthearted surprise. After an acapalla intro featuring the two horns both solo and in a duet, they eventually looped around into the Flintstones theme song, which as you may know is derived from part of Beethoven’s Piano Sonata No. 17 Movement 2. “Meet The Flintstones” received hearty applause from the audience at The Aud on Saturday, particularly when Marsalis shouted “WILMA!” toward the end of the tune!

Next up was a very slow, sensual number called “You Don’t Know What Love Is” that at first reminded me a little of “Stormy Weather.” It was so quiet and soulful that it was almost loud. I could just picture Lauren Bacall and Humphrey Bogart dancing cheek-to-cheek under a stand a palm trees in the moonlight, and I could smell the ocean. The music was so relaxing. The drums were amazing, and as the music built, I could feel and sense the high tide rising around me, and see the waves crashing onto the shore — then it subsided, and it was peaceful again. Gorgeous.

After a brief intermission, the band covered “Blue Monk” by none other than jazz great Thelonious Monk himself. It started off slowly, almost timidly, then grew sexier and louder as Marsalis and his trombone kicked in with a smoking-hot melody. Bassist Jeremy Boettcher outshone his own outstanding talent on this song with sensual-but-spare bass lines, not overdoing it but not leaving any appropriate moments unthumped, so to speak.

This tune reminded me of a love song that might play in a more modern film such as “9 1/2 Weeks” or “Top Gun,” before it swung back to a more 1920s speakeasy sound with a true burlesque flavor. The audience ate it up.

Jones’ trumpet solo was nice, easy and gentle — then it grew a little sassy but still sweet. It reminded me of a lover asking the innocent question: “Do you love me? Because to me you are the sun, moon and stars — see them shining on us?” Then (the music reflected as it slowly built), she says yes, quietly with kisses all over his face, and he begins to SHOUT from the rooftops and run through the streets, yelling out, “SHE LOVES ME!”

What a climactic song with a great, triumphant finish!

Next, the band performed “Speak Low When You Speak of Love,” a Latin-tinged number that really jammed. Jones was invigorating on trumpet, to say the least, with many climbs and valleys — this guy excels at high-note runs. Video:

After another beautiful song — this one a story song called “Lost in the Crescent” about indentured servants who are forever signed on to work for “the man,” in which the trumpet and trombone take turns on lead melody — the show ended, but not before an encore that featured a classic New Orleans second-line jazz tune complete with an audience march around The Auditorium, led in part by Jones and Marsalis, who came off stage and joined the “march,” horns and all, during the middle of their song! And, yes, I captured this song in its entirety on video:

I guess I don’t have to tell you that Marsalis and crew received a hearty standing ovation at the end of the evening — about the fourth of fifth one of the night. All well-deserved, I might add.

Originally published on September 30, 2012, in the Lovely County Citizen.